A weekend or 2 ago I made plans to go down to South Wales and ride road bikes with some old friends from Shropshire, as well as the weekend I also had Monday and Friday off. We were staying a couple of miles south of Builth Wells in the arse end of nowhere, but this meant that I was driving through Rhayader to get there. This also meant that, on my way down, the possibility of a ride in the Elan Valley was very much on the cards. I did some hunting on strava and discovered a loop entitled "Clive Powell's VERY challenging challenge ride 2016". The hint should have been that this was a 40km loop that the guy had completed in 2 hours and even he thought that it was VERY challenging. I got to Rhayader at around 10:30-11 and did the usual faffing including paying for a £3.20(!) parking ticket. I was expecting to know a few bits of the ride from last year's transcambrian but very quickly I found myself going off in a direction that I didn't know. I rode on roads for long enough that I was starting to wonder if the route was actually a road ride but stuck with it as it was a nice day and the views are great so it could have been worse anyway... Nope, after a little while I picked up a bridleway and was somewhat relieved. I rode through some woods for a little while before embarking on my first descent of the day, a really fast bit of dirt singletrack. Pretty nice. 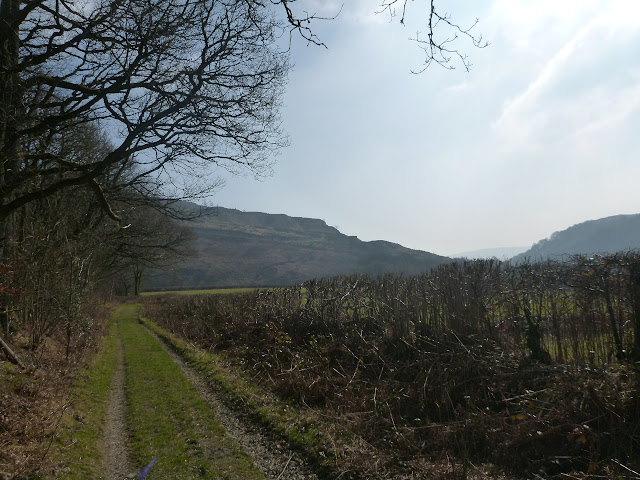 I was then met with a mixture of bit more road and easy track for a little while. As a part of this track was the most swayingest suspension bridge I've ever been on, it moved in just about every direction. 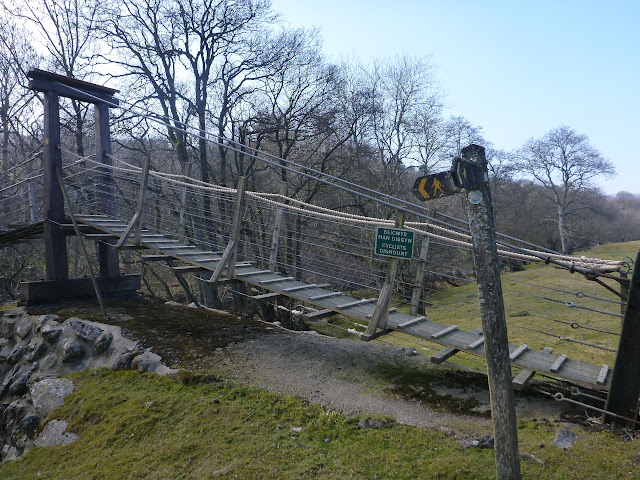 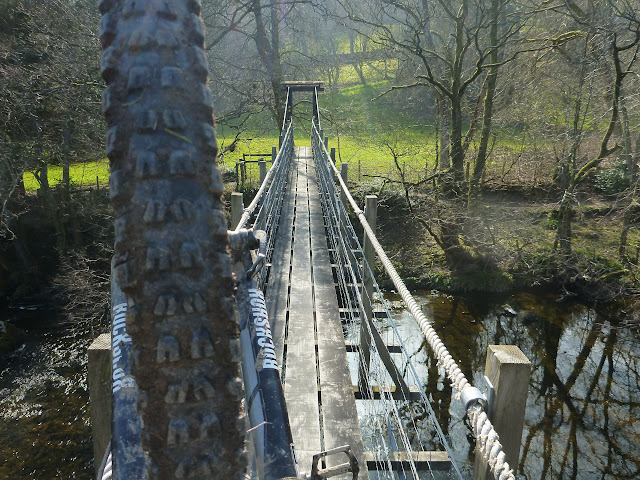 After a while the route joined onto a hardpack, double track, bridleway. This was a brute. A pretty steep, pretty long climb. Strava puts it at 11% for 1.1km, the segment is called "Breathing out of every hole to the farm" and is quite accurate... At least the surface was decent and I made it up without too much trouble although almost gave up during one really steep bit, but I didn't! Through the farm and I rode along the top of the one of the hills which offered some pretty rad views and also encountered some rather stubborn cows that were not for letting me stay on the road to get past them. This was followed by losing quite a lot of elevation on a fireroad which didn't fill me with joy. 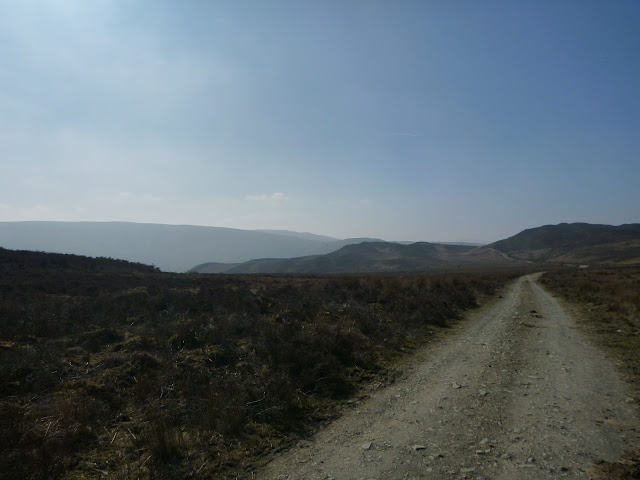 I followed along a road for a while until I saw a steep road leading off up the hill to my left, a feeling of inevitability crept in and then I realised that I recognised where I was. This was the stupid steep road that we'd done on the transcambrian. At 15% but only 0.6km I think that it was actually easier than the farm climb was, I was glad to get up it in one go. I followed the same route as the transcambrian for a little while, starting out with a flatout grass descent on which I managed to go the wrong way a couple of times. 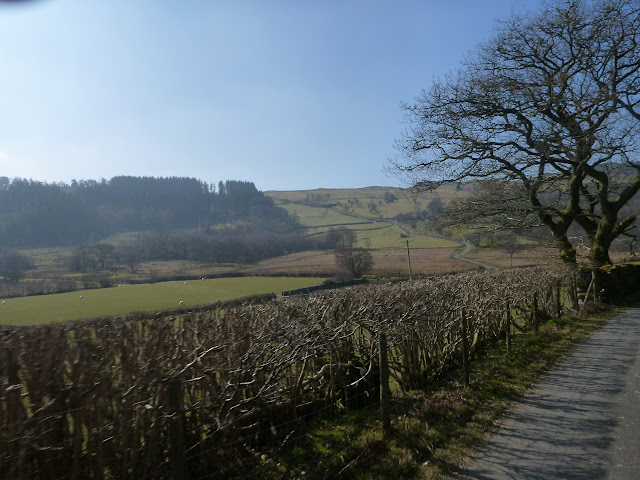 The route then climbed back up until undulating a little bit over fields, offering fantastic views out over the reservoirs. I was beginning to get worried that the route was going to continue following the transcambrian onto my least favourite part of that day but luckily it split right instead of left, hurrah! Instead of following down the really rocky, hard going, double track, the route ran parallel on a road. Much nicer. After a while it was time to go back offroad and into another climb. 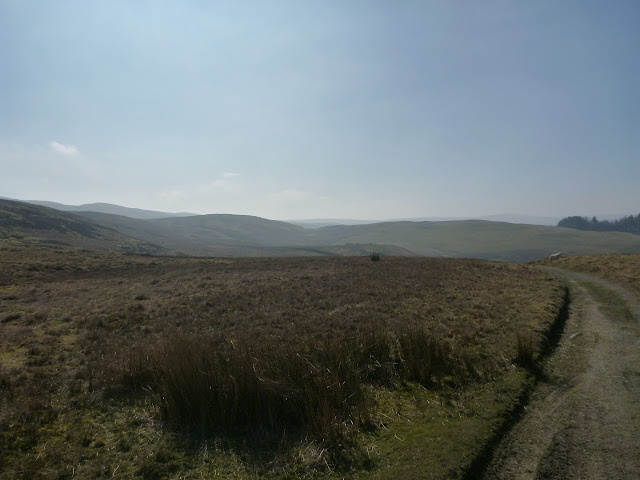 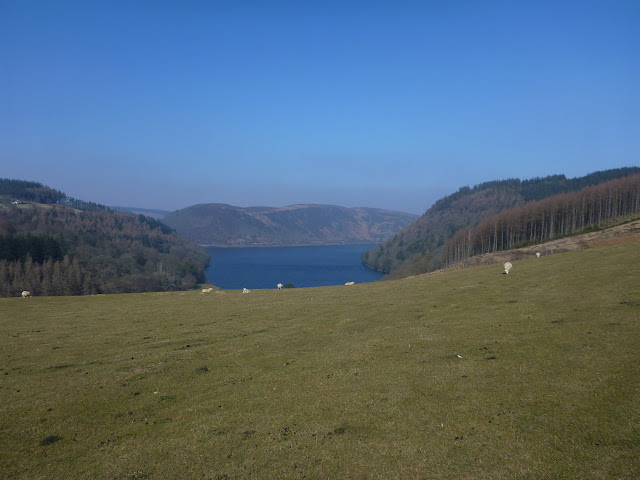 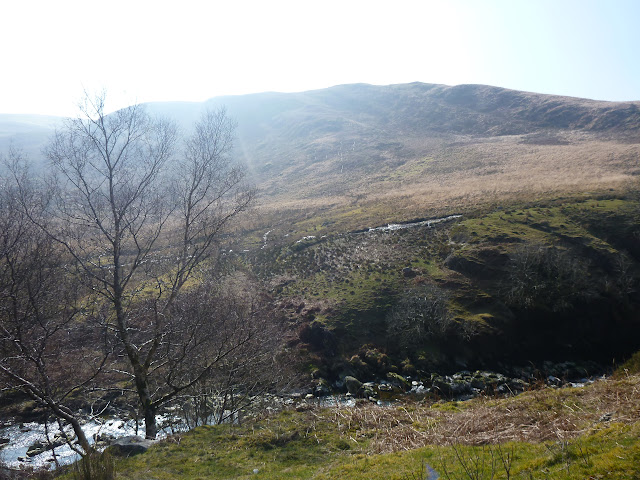 This climb started out on tall grass in a bog. I was beginning to fear the worst, a long push to get up the field. Luckily I pushed up a little bit and a rocky doubletrack appeared, this was a relief as I could actually ride it. It took me up for quite a while until I reached some sort of weather station. After this the fun really began. The descent started out as flatout down a grass field before going through a gate and becoming dirt singletrack through the woods, across a fireroad and into rocky singletrack. This was a great descent, really long and pretty varied. Bits of it reminded me of the Dyfi. Definitely the best bit of the day. At the bottom of this I crossed a dam and was faced with a choice. Do I keep following the route or do I follow the road back to Rhayader? I was feeling quite tired but it looked like the route followed a cycle path the long way round to Rhayader so I thought that I'd stick with it. Mistake. Big mistake. 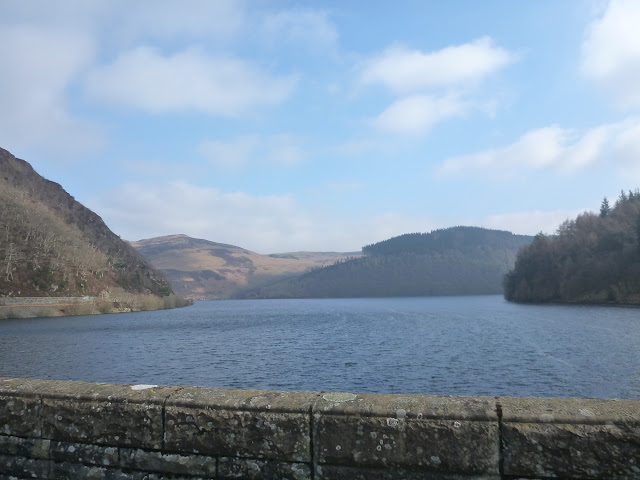 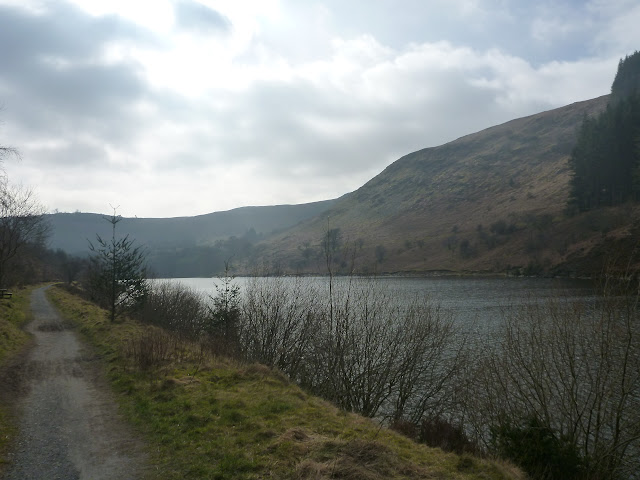 The route did follow the cycle path for quite a while before suddenly turning off up a bridleway that there was no way I was riding up, luckily the steep bit was only short and I was back on the bike on doubletrack pretty quickly. This gave way to grass. I hate grass. The climb was just steep enough, and me tired enough, that I was off and walking, and walking, and walking. Walking uphill really messes with my legs quite badly and my right foot was beginning to feel heavy and I was having to pep talk myself into just keeping going. It seemed that this moorland climb was endless but eventually I reached the top of it. It'd gone cold and all I could see was more moorland. I was feeling pretty demoralised at this point, but at least I could get on the bike and spin a low gear so every cloud has a silver lining n that. It'd hit the point where I was having to lift my right leg to put my foot on the correct bit of the pedal and I couldn't lift my foot to the top of the stroke to place it on the pedal any more either. This is starting to moderately concern me as it seems to be happening more frequently as time goes by but a bit of a rest and a section where I can spin and it usually rectifies itself. I'll just continue to not think too hard about it! I followed the trail, for what seemed like forever, and eventually it started to point downhill. By this point I was knackered and just took it very steady as the trail descended to a road. I was very, very happy to hit this road which was pointing downhill for quite some time. I started riding down it for a while and I saw that I was off course. Sod it. I pressed on assuming that it'd drop me into Rhayader, there were a couple of moments where I was off the OS mapping on my garmin that I have for the area where it looked like it was going to take me into a different valley but it came sweet for me. It dropped a very cold, very tired me into Rhayader. I rapidly packed the car and pressed on to Builth, despite the heating being on full blast I think it still took until near Builth before I stopped feeling cold. All in, it was definitely a VERY challenging route but I discovered a couple of pretty rad descents. It's not a route I'm ever going to ride again but I think that it showed me some good stuff and I did enjoy most of it. The fella who I nabbed the route off on strava had managed to complete the ride in under half the time that it took me! My garmin was playing the "virtual partner route complete" jingle before I'd even hit half way, had to laugh. Had I turned right instead of left at the dam then I think that I'd have been pretty happy, a bit too much road for my liking but fun and it really is an awesome place with fantastic views. Garmin route

I spent the weekend just gone doing a mini game jam. A first for me. The project is one that has existed for a little while, the game was thought up by my

Early start to get down to bike park Wales. We managed to get there at around half ten and after faffing around were ready to ride at around eleven. We were riding up