So this is a ride that's been in my sights for some years now, it's not until recently I've actually acquired the level of fitness necessary to give it a bash though. What is it? It's a 104 mile route that snakes across (and a bit up) Wales, starting at Knighton (Shropshire border) and ending at Dovey Junction (near Machynlleth). It's usually done as a 3 day trip so we decided to do it in 1. We being Harris and I. We were far from being the first people to do this and there have been some very, very impressive times done in the past. I think it's been done in under 10 hours! Why? Well, firstly because I wanted to. Simple as. Also, though, it seemed like a good opportunity to try to raise some money, and awareness, for the MS Society. How'd it go? Brutal. Utterly brutal. I'd prepared for the distance, I'd prepared for the elevation (OK I hadn't prepared for quite that much!) but I had not prepared for the grass. It was a long, long ride but we managed it, although we did cut to Machynlleth at the end instead. It was 2230 by the time that we had hit the last point where we could go to Mach instead of Dovey Junction so the choice wasn't difficult. So, from the top... 3am my alarm went off, I forced down 3.5 weetabix (couldn't face the other 1.5), threw my food in the car and left for Knighton. En-route I also picked up Ben. I don't function at all well before 7am so Ben's attempts at conversation were mostly met by grunts whilst my brain tried to shut itself down. We got to Knighton at around 4:30 without my falling asleep and after faffage set off just before 5. I was feeling pretty ropey at this point. 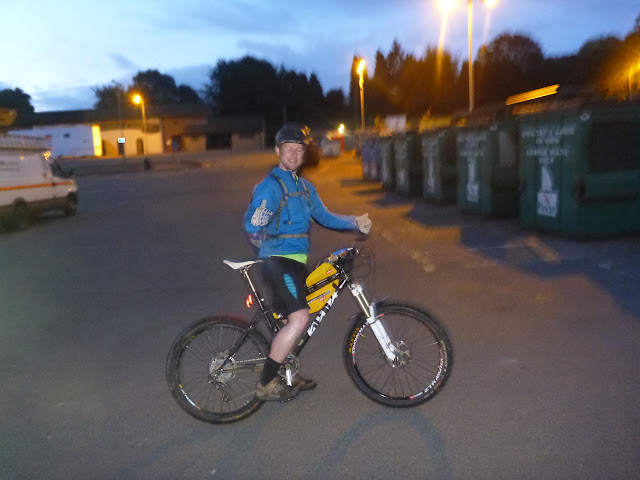 I don't really want to write a blow by blow account so I think that I'll pick some photos from the ride and just put down a few words about each. 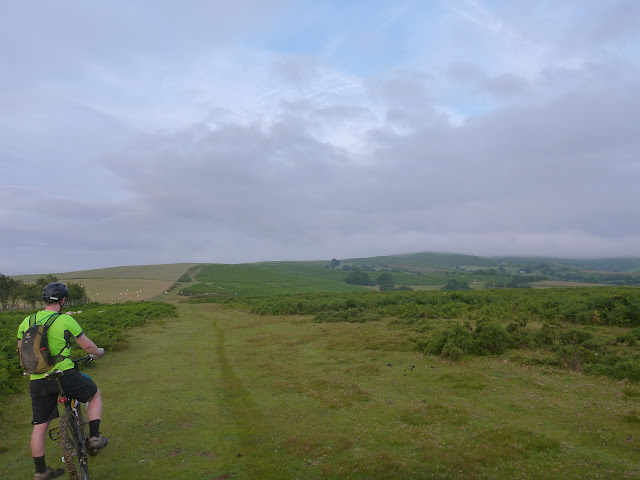 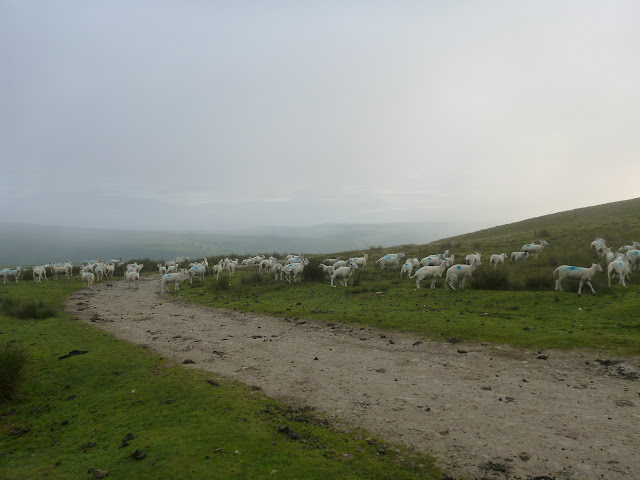 This first picture was one of the first climbs, it was one of many grass ones. The one that we'd just got up was a hike with a bike, and also grass! Draggy, draggy grass. For me, the grassy sections were the hardest part of the ride by quite some way. The second picture is just some sheep! After a while the grass gave way to dirt track which was much, much nicer. 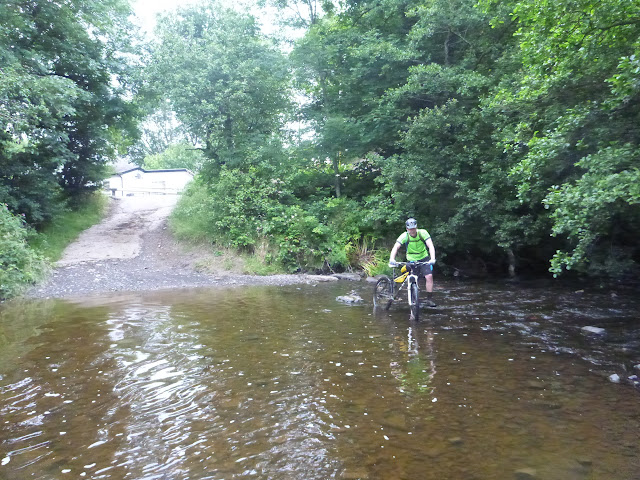 Ahh river crossings, there were a few of these too although this was the first of the day. Later in the day we had to pass through a quite deep, fast one in the Hafren which I had a jolly refreshing lie down in. Less than ideal! 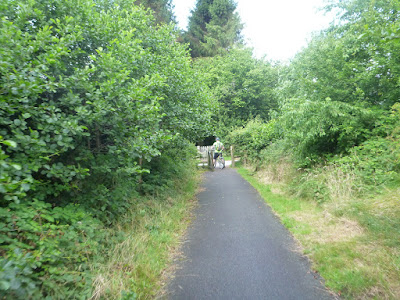 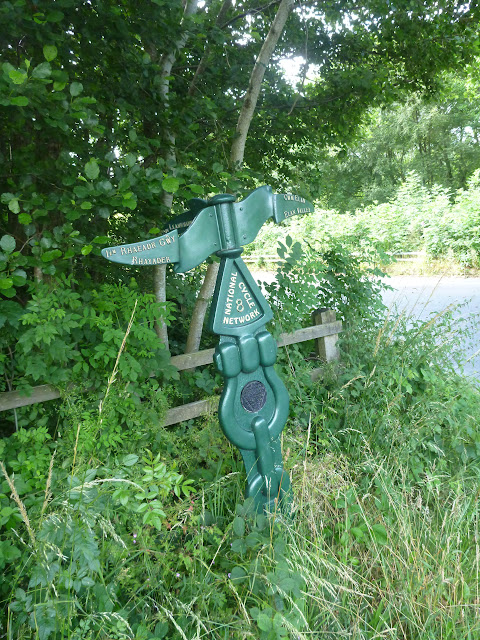 This path was just after Rhayader so roughly 1/3 in and was a few, welcome, quick kilometers on a fast surface away from the cars. After all of that grass it was quite nicely different. The gpx route that we were following was split into 3 parts, Rhayader marked the end of part 1 which was psychologically a big milestone. These milestones got a lot more important the further in that we got; half way, end of part 2, 100km etc... Another big boost was reaching bits that I already knew. 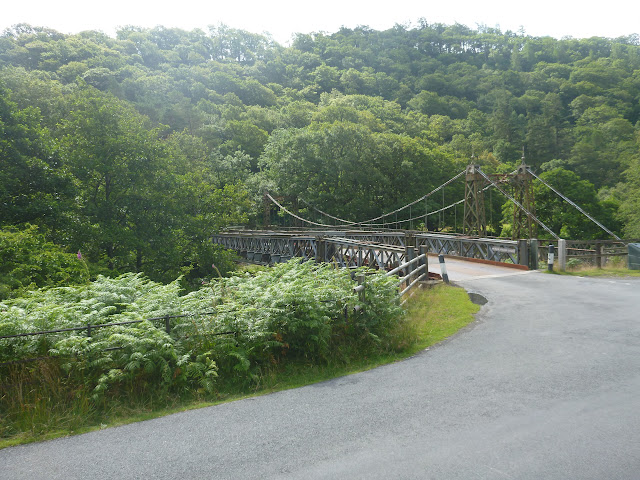 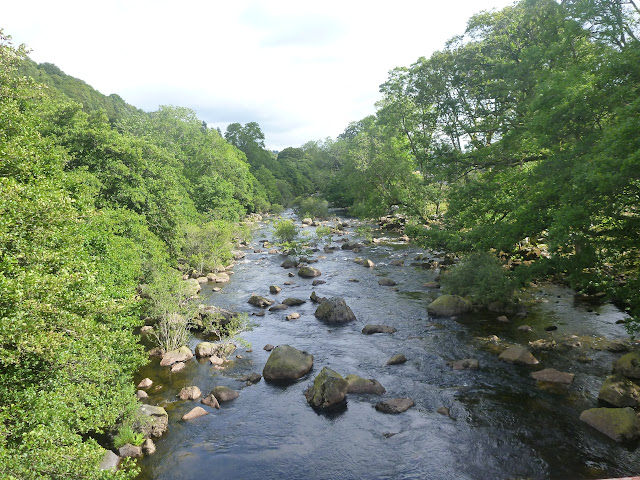 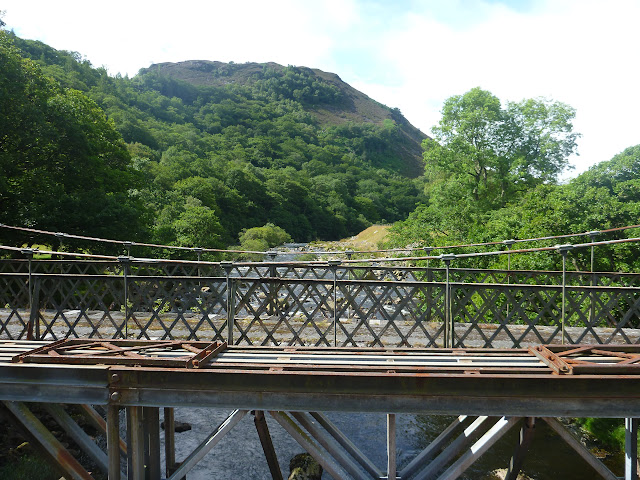 The cycle path took us to Elan Valley. I'd never ridden in the Elan Valley before but have wanted to for some time. It was really quite beautiful. We climbed up a meandering road for a while and gained a fair bit of height before hitting, what was practically, a road wall. Blimey it was steep! After that we wound up on... grass again! Although, after the grass was a long flat track that was as rocky as a rocky thing which at least kept the mind active trying to pick the way! Quite a few large pools of water in this part of the world. 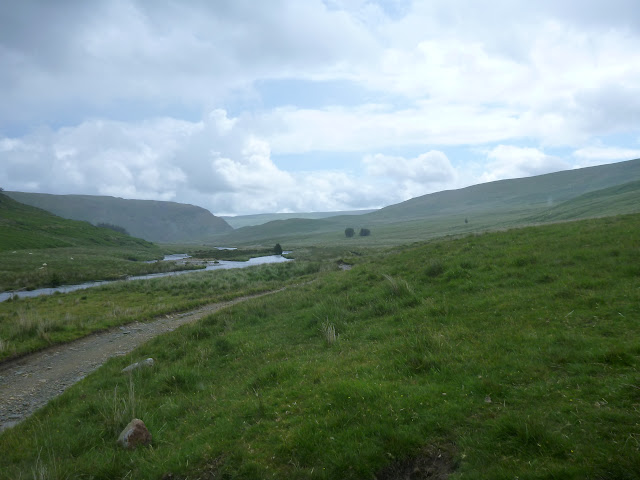 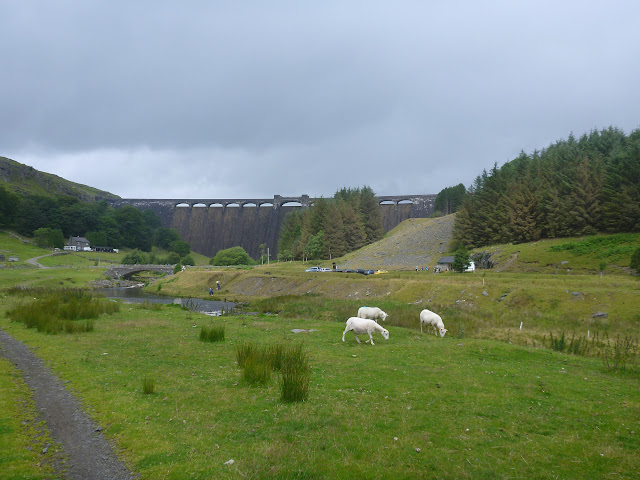 The end of the track dropped us at the bottom of this dam. We had to cross the river by riding through it before crossing it again on the bridge. We rode round and up to the top of it before riding around the reservoir itself to the other end. We to-and-fro'd with another couple of guys at this point. Later on we caught them up again and had a bit of a natter. They were riding day 2 of the transcambrian and were mightily impressed that we were going for the lot in a day. We saw them a lot more times and also wound up in a handy position where we'd open gates and they'd pop up just in time to close them. A couple of more climbs and I knew where we were! Up on the road above the teifi pools. 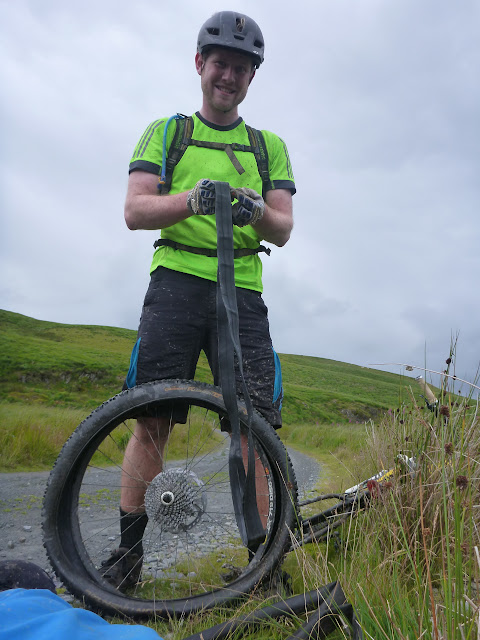 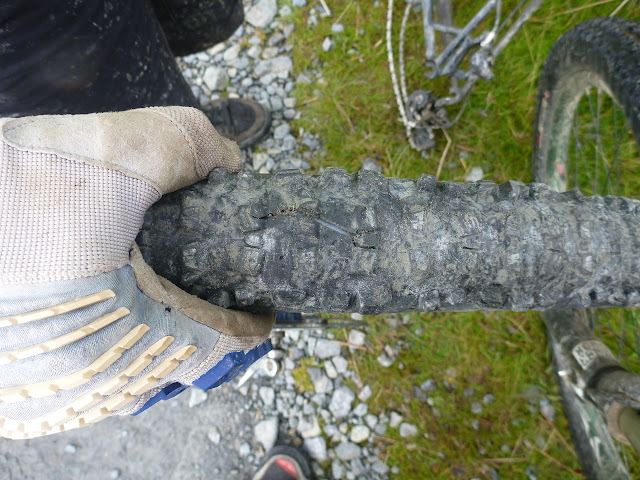 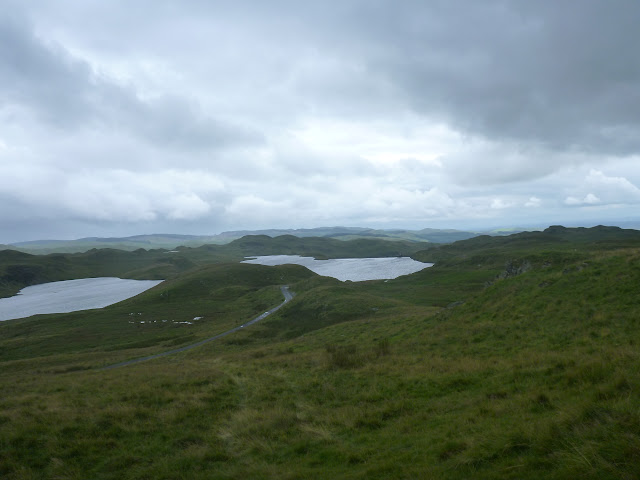 En-route to the Teifi Pools (bottom pic) Ben managed to slice his tyre, a pretty good slash n all. Luckily I had a tyre boot so we threw that in and away we went. Actually, I had 2 boots which was a good job as he later also sliced the boot! We followed the route that I'd done before with the Ystwyth crew for a while before starting to head back toward Llangurig. For some reason I'd thought this section would be really easy, the bit from Cwmystwyth was pretty horrible but rideable though. 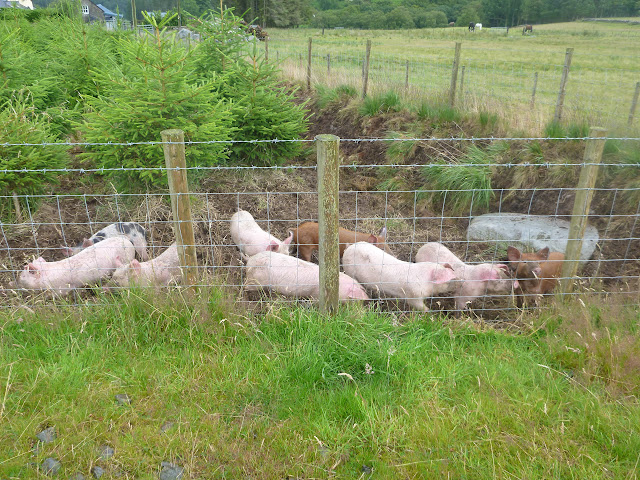 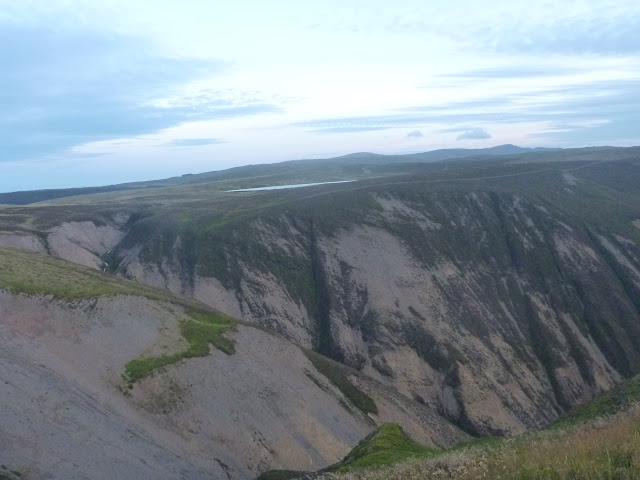 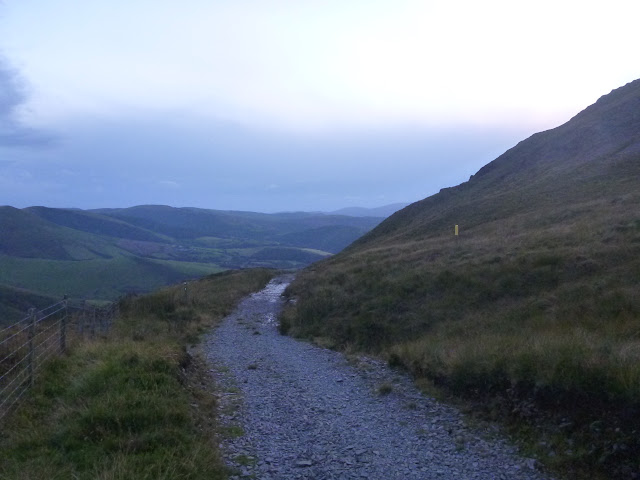 I've managed to skip a pretty huge distance here! Llangurig to Foel Fadian but to be honest there wasn't a lot of note. A load of great views but that's about it! Although it looked like there was some good riding to be had in the Hafren Forest, and of course my little lie down in the river. The top of Foel Fadian itself was covered in chippings which was pretty exciting! After that it was flat out on grass and then fireroad, I'd given up caring about self preservation by this point and boy did the ground move fast! We continued on our merry way from the bottom until we joined the fireroad that leads to the zigzag climb on the Mach3 loop. The route went the opposite way to the climb (so did we!) luckily. There was almost a crisis of sense of humor loss at this point. I had thought the bit from here to Dovey Junction would be back roads and easy, seems not. Took me a few minutes but I identified a road straight to Mach. Instead of turning off the road after a bit to follow the route we just kept on it to Forge and then Mach. With what I estimated to be an hour riding left, on unknown terrain, we thought that we'd best call it a day and get to our lifts. We only cut to Mach because we were considering the people waiting for us, honest ;).

{width="4000" height="3000"} Well that was it, that was the end. Coop car park. Man it felt good! A phone call was placed, our lifts were in the pub together. I saw that one coming but glad that they weren't just sat bored in the cars. 164km distance, 3984m elevation climbed and 17h40mins total. Big day out! Glad that I did, it's one to tick off but I won't be riding it again in a hurry. It was very pretty but not really the sort of riding that I enjoy most, a lot of descending was on road/fireroad which I had expected, to be fair. Next weekend I'm going to everest the leg burner. That's a lie. Quite possibly best of all we also managed to raise just over £2000 for the MS Society which is awesome, thank you so so much to everyone who has donated. Link to JustGiving. Link to the route. Link to the album.

Well I have the next week off so some biking is going to occur. Despite being worried back in February that 10 days of holiday (not including bank holidays) wouldn't be enough to

A 100km ride has been on the cards for me for a while, it's something that I've really wanted to do. As an aside I've attempted a ride with 2km of elevation a